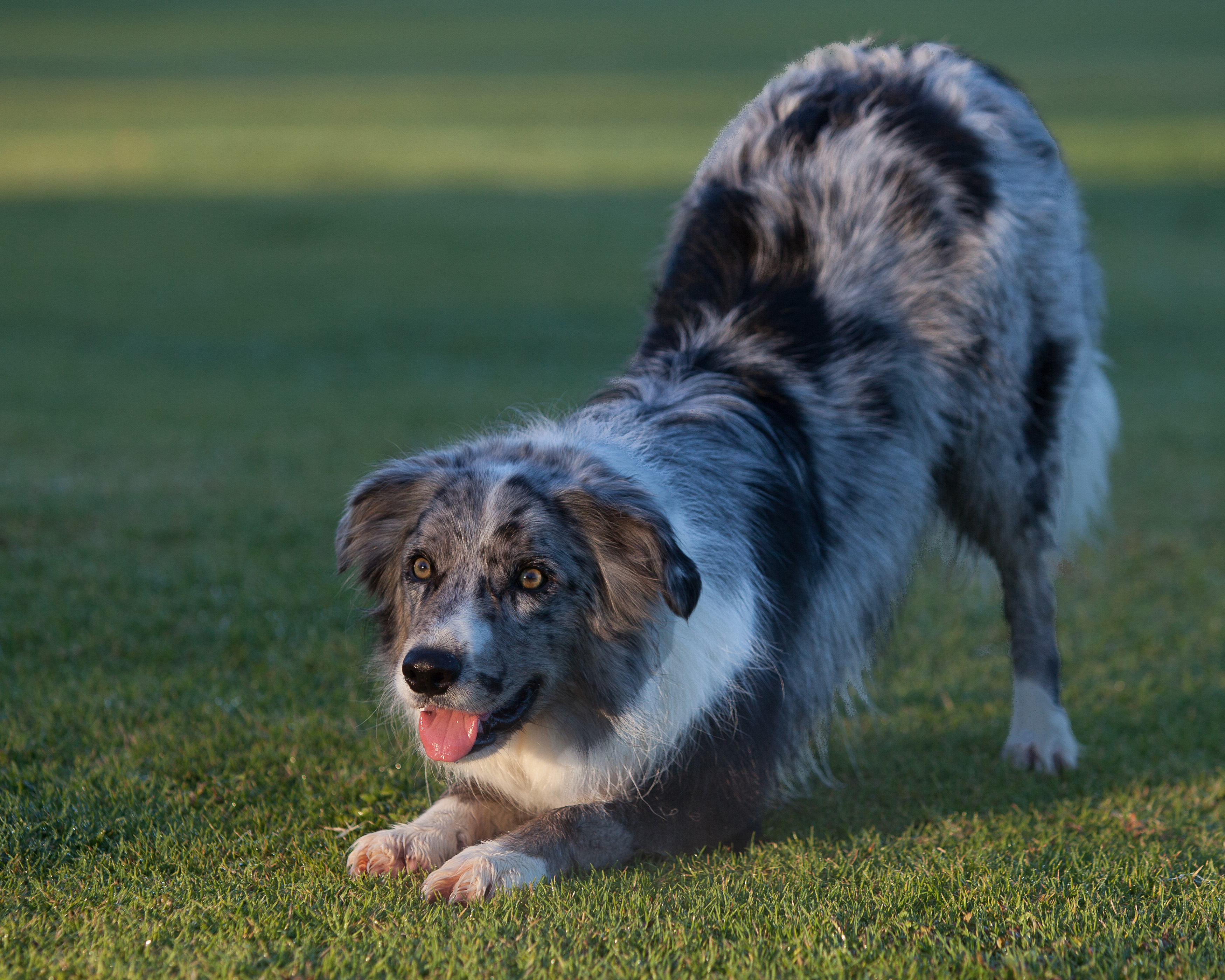 WHAT IS DANCES WITH DOGS?

Despite the title of this fast growing sport, it has little to do with dancing but plenty to do with music.  There are two sections, one is heelwork to music which, as its name suggests, is the dog heeling, not just on the left side of the handler as is done in traditional obedience, but also by the handlers right side, in front of the handler, behind the handler and going either backwards or forwards.  As long as the dogs head stays reasonably close to the handler’s leg it is regarded as heeling.  Once you have taught your dog there is more than one way to heel you have to choose music and cut it to suit your routine, because as you are heeling you will be interpreting the music.  The other section is Freestyle, in this section dogs will learn a variety of moves including spins, weaving through the handler’s legs, backing, bowing (pictured) and many other moves.  Again the music needs to be interpreted but there is no need for the dog to work in close proximity of the handler.

There are four levels to enter: Starter, Novice, Intermediate and Advanced.  Routines can be from one minute to four minutes, and it is suggested that the starter routines stay at the lower end of the scale building up to near four minutes for advanced level.  To gain a title, the dog needs to qualify three times before moving on to Novice and then needs three qualifiers in Novice before going on to Intermediate and so on.

To be honest if you can walk with your dog you can enjoy heelwork to music, if you love music, enjoy time with your dog then this is the sport for you.  The great thing about DWD is that at all levels you can speak to your dog and help him out with extra signals with no penalties.  MDTC holds regular classes and to join the class it is important to have treats, toys and a sense of humour, because we all have a lot of fun. 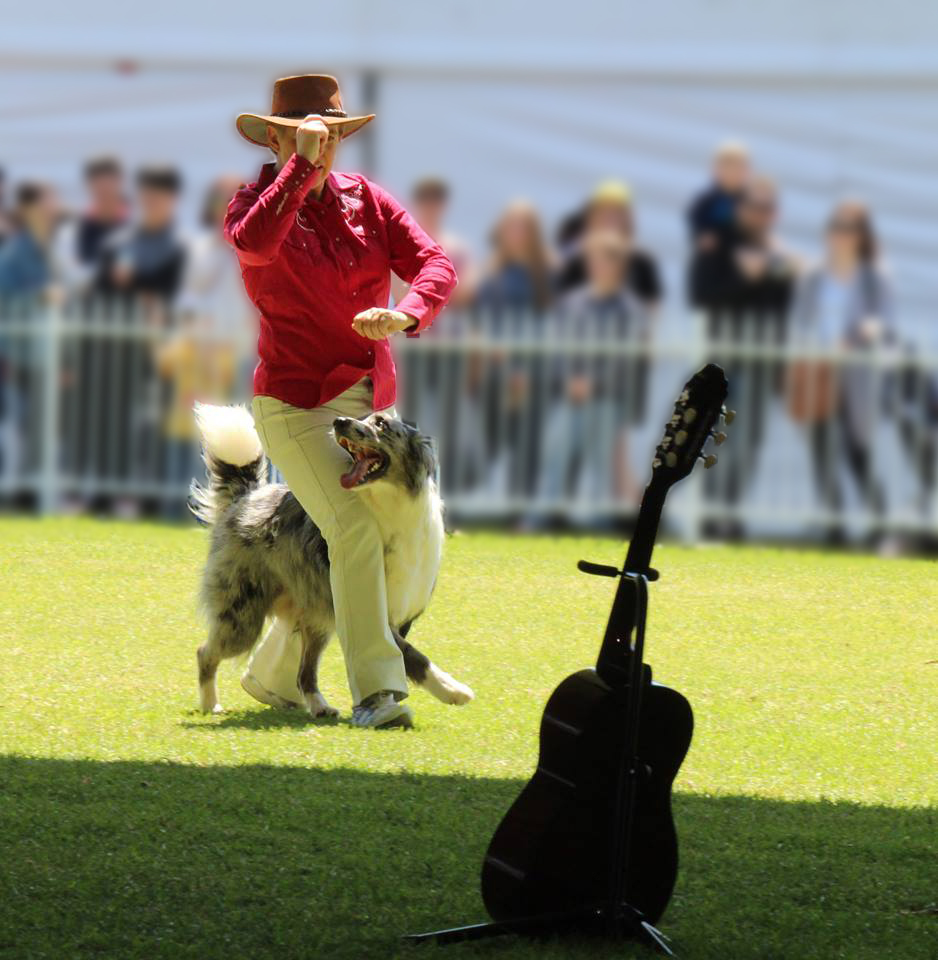 A HISTORY OF DWD IN WESTERN AUSTRALIA

Jill and Amanda Houston started a demo team in 1995 and as part of the demonstrations, a section was incorporated to include heelwork with music.  They put a heeling routine together, played music in the background and performed heelwork with two to three dogs including some double about turns and diagonal turns in the pattern where it fitted the music.  The first demo in front of a large crowd was at Brigadoon for the Night Of Stars with Anne Lacy Herbert commentating, while Amanda and Jill Houston with Debbie Hyde, Helena Fitzgerald and Simone Tolhurst put on a display of dog tricks with a HTM routine included.  That was the start.

In 1996 they heard about Mary Rays amazing heelwork to music demonstrations and determined to find out more about it.  Once they did they started a group called ‘The Doggie Dancers’ a name thought up by team member Michelle D’Wynn.  Also in the team was Michelle Carter, Joanne Houston, Allison Miller, Debbie Anderson, Helena Fitzgerald and Debbie Hyde and of course Jill and Amanda.  Many die hard enthusiasts around the world did not like the name as they thought it trivialised the sport, however ‘doggie dancing’ has become a catch word worldwide since then.  The group soon had many routines going and were performing all over the State including the Perth Royal Show and a TV programme on Channel Seven.  Following all of this Amanda and Jill were invited to Singapore to demonstrate Doggie Dancing and give some lessons. They were told our Singaporean friends would be a bit shy about performing in public but they soon found this not to be the case!!

The decision was then made that although they were running fun competitions in WA it was now time to get serious and arrange an official event.  The WA Canine Assoc. was very helpful and WA became the first state in Australia to hold an official HWTM competition.  The inaugural event was held in December 1998 at Lumen Christi College in Gosnells, run on similar lines to the judging format of the UK competitions. The whole event was written up in Ringleader with a fabulous full critique by judge Honey Gross-Richardson. There have been further competitions since then with companies offering fabulous sponsorship enabling great prizes being offered to the entrants and gaining profits to donate to the Princess Margaret Hospital for children.

After many years of behind the scenes work HTM, renamed Dances With Dogs, became an official ANKC competition in 2009.  It was split into two different sections one for heelwork to music where at least 60% was to be made up of heeling positions and the other freestyle which showed off more independent moves.  Prior to this Jill Houston ran training sessions for foundation judges including judging video and live performances.  The ‘new’ judges threw themselves into the training with great enthusiasm and passed a written exam on the rule book on January 14th 2009 then sat and passed a practical exam on January 25th 2009.  The foundation judges for WA were Jill Houston, Amanda Houston, Debbie Hyde, Anne Lacy-Herbert, Honey Gross-Richardson, Rick Richardson, Cheryl Bedggood, Karren McCluskey, Paul Skewes, Valeta Pethrick and Helena Fitzgerald.

Midland DTC ran the inaugural competition on the 13th June 2009 with a fabulous entry of 28.  The second competition in WA was on the 4th July 2009 and this saw Australia’s first dog to hold an official ANKC title in HTM and Freestyle Borderfame Hart To Hart CDX HTM S DWDF S a Border Collie with his very proud owner Anne Rowe.  Since then many competitions including those held at the Perth Royal Show, The Western Classic and the Canine Centre have attracted excellent entries of 28 to 61 routines.